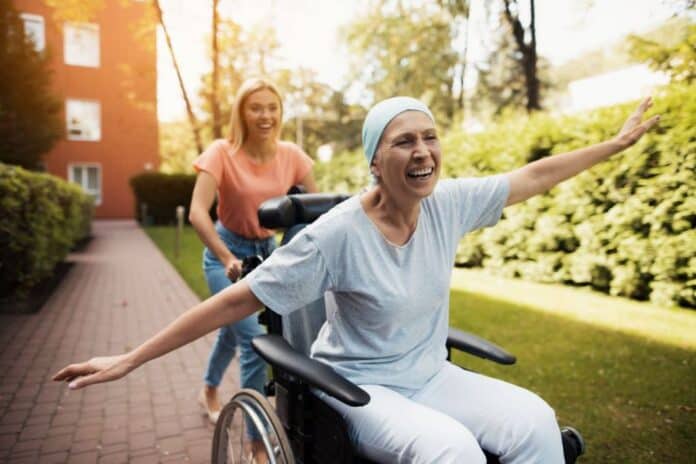 No matter how happy or positive a person you may be, a cancer diagnosis is nothing to smile about.

Depending on the stage of your particular cancer, this devastating disease can claim your health very quickly.

In fact, cancer can seem like doom and gloom from the moment you’re diagnosed – which is why so many cancer patients end up depression and beaten.

One particular study published in the Journal of Pain and Symptom Management examined the effect of anxiety and depression on survival rates for lung cancer patients.

Researchers found that patients who experienced anxiety and depression after being diagnosed with advanced lung cancer were more likely to die sooner.

Similar findings were shown among breast cancer patients, which has led to the conclusion that psychosocial factors have a major impact on cancer survival rates.

A 2017 study investigated the effects of depression on 5-year survival rates in 3466 patients with cancers of the head and neck.

Nearly one-fifth of the patients were diagnosed with depression during the study.

Many more studies have explored the link between depression and cancer survival rates. Much of the evidence suggests that depression increases cancer progression rather than survival.

However, there is evidence that reducing depression during cancer not only reduces the mortality rate but can increase the chance of survival.

A randomized clinical trial that tracked the progress of 101 women with breast cancer found that those who showed a reduction in their depression symptoms had longer survival times over the following 14 years.

When depression symptoms improved, so too did their cancer. On average, those who overcame their depression lived an extra 53.6 months, as compared to those whose depression worsened and lived an average 25.1 months. This suggests that overcoming depression can almost double your survival rate from cancer. Similar findings have been observed in those with heart disease.

Well-known author, doctor and speaker Deepak Chopra is a huge advocate of positive thinking, especially when it comes to beating cancer. He acknowledges that it’s very, very difficult to encourage people to maintain a positive mindset when they have cancer. Cancer, after all, is one of the most feared illnesses of our time.

However, he points out that just “thinking positive” alone isn’t the only way to overcome the depression associated with cancer.

Even when we have cancer, our brain holds the key to numerous self-produced neurochemicals that turn our pain and frustrations into pleasure and make us feel happy. A positive state of mind can’t always be brought on by thoughts alone: a lot of chemicals called neurotransmitters are required, too.

The trick to unlocking these ‘happy chemicals’ in your brain is through positive lifestyle changes.

Fortunately, these are quite easy to achieve!

Generating the endorphins that sustain a positive mood depend on good food, exercise, and social support.

Regular exercise is especially important. Research suggests that physical activity has important benefits for cancer patients, both in the body and mind. Exercise may also reduce the risk of cancer recurring and extend a patient’s survival.

Doctors recommend exercise a means of improving physical function, quality of life, and psychological well being. Where possible, cancer survivors are encouraged to meet the recommended 2.5 hours per week of moderate exercise to the extent that their physical condition allows.

Eating well is essential for providing the nutrients that neurotransmitters need to function. Certain foods have been scientifically shown to lift your spirits – especially raw fruits and vegetables, walnuts and cashews, kale, oysters, coffee and dark chocolate! (Remember, moderation is key!)

Support is a key

And finally – support. Nobody should go through cancer alone. Research shows that social support following a cancer diagnosis is incredibly important to a patient’s well being, both physically and psychologically.

That’s why friends, family or even just a cancer support group are worth seeking out during a battle with cancer.

Cancer sucks – we all know it. But don’t let the negative thoughts and depression thwart your ability to beat it! Get moving, get eating, and get support when you need it. You can do it!

Do you like this article? Go to the home page to see fresh healthy-related articles.