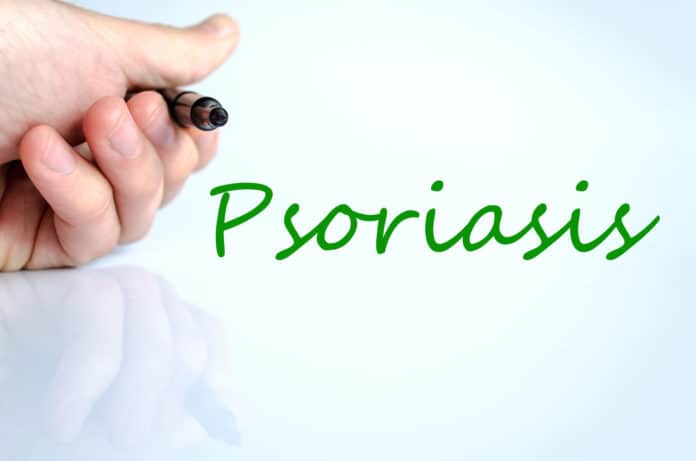 If you’ve ever had a skin condition, you’ll know how much your confidence suffers. Especially when you have a flare-up.

Chronic plaque psoriasis affects more than 6 million Americans. It’s a common autoimmune disease that causes patches of itchy, scaly and flaky skin to appear on the scalp, knees, and elbows. These patches can affect anything from 10 percent to 100 percent of the body!

Those most commonly affected are adolescents or middle-aged adults.

One of the worst things about chronic psoriasis is that it flares up just when you’re least expecting it. The patches may disappear for a while, but they’ll suddenly rear their ugly head again when triggered by something you can’t control, such as stress.

Treating chronic plaque psoriasis usually involves lifelong medication. And, as with most medications, there are negative side-effects.

Earlier this year, the FDA approved a brand-new breakthrough drug for treating this debilitating condition.

It’s called Tildrakizumab. Yes, it’s a mouthful – but it could also be the end of psoriasis.

The clinical trials conducted on Tildrakizumab were recently published in the medical journal Lancet in March. This powerful new drug is the result of 15 years of research at Harvard Medical School.

What’s more, it’s been found to be both highly effective and well-tolerated in patients with moderate-to-severe chronic plaque psoriasis.

The scientists behind the study wanted to design a drug that treated psoriasis by targeting a specific part of the inflammatory pathway. And they did it.

Tildrakizumab is a drug that belongs to a class called biologic agents. Unlike traditional pharmaceutical drugs, biologic agents are made up of molecules that the body makes naturally — like antibodies. They’re reformulated’ by scientists to treat disease.

The clinical trials of Tildrakizumab have shown amazing results. More than 1800 patients from around the world were enrolled in trials and then treated randomly, with some receiving the drug and some receiving a placebo.

Most of the patients in the study had at least 30 percent of their body covered in psoriasis rash. After 12 weeks, things were very different. An incredible 65 percent of those taking Tildrakizumab had skin that was almost completely clear of psoriasis.

When measured by the standard Psoriasis Area Severity Index (PASI), this was acknowledged to be a 75 percent improvement!

Only 10 percent of those taking the placebo showed this much improvement.

What’s even better is that the scientists believe even more improvement will follow. The longer people take the drug, the better their skin will get over time.

The way Tildrakizumab works is all to do with the various components of the human immune system. Those who suffer from psoriasis have complications with molecules called interleukins. These are the molecules involved with inflammation and allergies.

Scientists set out to design a drug that could inhibit interleukins naturally, thus reducing the inflammation that leads to psoriasis. The solution, it seems, was a drug that used antibodies - the very molecules that our own body produces to stop interleukins from causing inflammatory conditions.

The development of this specific treatment involved several phases of research, clinical observation, and epidemiology. Without getting too technical, the scientists eventually identified a type of interleukin specifically involved in the ‘flare ups’ that result in psoriasis. Tildrakizumab stops this interleukin in its tracks, preventing the ongoing effects of psoriasis.

Basically, biological agents treat psoriasis by curbing the effects of T cells, a form of white blood cell involved in the autoimmune reaction. It then blocks a substance called tumor necrosis factor-alpha (TNF-alpha), one of the chemicals that send messages to the immune system about setting up an inflammatory reaction. By doing this, the drug stops the interleukins from causing the inflammation. It then binds to the proteins that cause inflammation so that they can’t trigger a flare-up.

The result is less inflammation in the body, and less of the thick, scaly skin associated with this annoying condition.

Of course, all you really need to know is that there’s a solution for your debilitating psoriasis. One that seems to work much, much better than any other drug so far.

Tildrakizumab is available under the brand name Ilumya. It’s now available as an injection for those who have moderate to severe psoriasis and are eligible for systemic therapy or phototherapy. The first injection is followed by another at 4 weeks, then they are given every 12 weeks.

It’s worth knowing that although the results have so far been amazing, there may be some side-effects. Some users have reported infections (14%), injection site reactions (3%), and diarrhea (2%).

In a perfect world, we wouldn't have to take pharmaceutical drugs to manage health conditions. Unfortunately, in some cases, it may be the only way to obtain relief.

If you want to try Tildrakizumab for yourself, begin by talking to your doctor. They’ll know whether you qualify for treatment, and where you can get it.